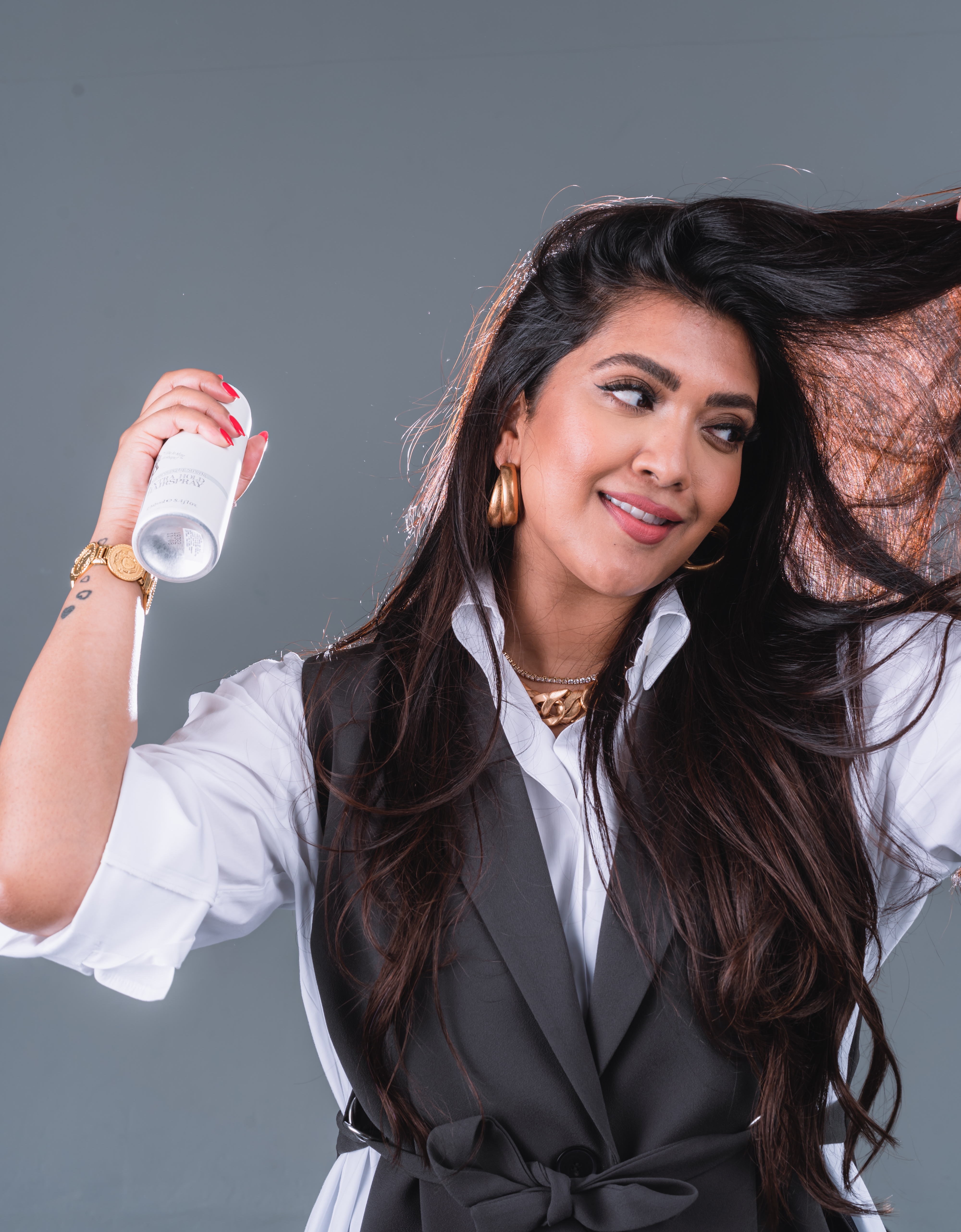 Forever fascinated by the world of colour, art and fashion as a child, Vithya’s passion lead her into the vibrant world of makeup where she learnt to master the art of creating the picture perfect blushing bride.

Vithya first qualified at the University of Arts, London College of Fashion with a Diploma in Hair and Makeup for Fashion, and then later attended several courses and Masterclasses to further her knowledge in Asian Bridal.

Her first brush with professional makeup was at MAC Cosmetics, Harvey Nichols, where she trained for 3 years before carving her niche in the Asian Bridal hair and makeup industry, internationally.

Over the course of 12 years her work has caught the attention of many, opening up avenues to showcase her talent on numerous fronts, including work for Vijay TV Awards, co-hosting the show Nadana Rajas on IBC Tamil TV, attending as guest judge for Deepam TV, and also giving career talks at schools and events. Her work has been published in UK’s top Asian Bridal Magazine KHUSH, India’s Magazines Manamagal, Verve Magazine, WE Magazine, Daily Mail SriLanka, and Deccan Chronicle, and been interviewed for beauty articles The Klog, and Kulfi.

She has worked with many South Indian movie stars including Nayanthara for the Movie Songs of Nanbenda as a production assistant, Meena for the cover of WE Magazine, star couple Sneha and Prasana for a Wedding Exhibition in London, Amy Jackson for the Music Video Lak Hilaade with Manj Music, Simbu for a song scene in the Movie Inga Enna Solluthu, Vidyu Raman, Director Bharathiraja for a test shoot, TV host DD for Vijay TV Awars Show in London, Big Boss star Raiza Wilson for a test shoot for her debut Movie Pyar Prema Kadhal, and the music sensation Anirudh for his Europe concert, among others.

In the last four years she has embarked on conducting Masterclasses, where she demonstrates Bridal looks and teaches the techniques and skills involved to create these looks. She is the first Tamil makeup artist to teach these classes internationally. Vithya hosted successful classes in the following cities; London, Zürich, Sydney, Kuala Lumpur, Chennai, Toronto, Melbourne, Bangalore, Montreal, Hyderabad, with her biggest class of 80 students in Coimbatore. She also had the honour of doing an Asian Bridal Masterclass for Bobbi Brown at their flagship store in Covent Garden, London, and taught an Evening Look for Nars Cosmetics at their Boutique store on Kings Road, London.

Vithya has completed 23 Masterclasses to date, with her 19th being a Guest Educator for Kanakavalli at their Flagship store in Kingsley, Chennai.

A new venture for her is YouTube, being a vlogger with nearly 300K subscribers, where she teaches makeup, hair styles, saree draping, and shares other random lifestyle vlogs. Her most popular video, a Saree draping tutorial, has amassed over 6 million views.

Having an interest in Music, Vithya appeared on her first Music Video with the German Rapper Majoe for the song Chellam. The success of the song led to Banger Music Records get Vithya on board again, and feature her alongside Majoe again for her first debut Vertau Mir.

Vithya is also a spokesperson who openly discusses issues around mental health and other matters faced within the South Asian community. She initially shared these on her blog page, which were then published by Huffington Post Canada, made the front page on South Asian Generation Next, and was featured in The Sun Malaysia. In 2019, she had been invited to be a panelist at Loyola College, Chennai, India, a Keynote speaker at the International Conference The Rise Malaysia in Kuala Lumpur, and was also a Keynote speaker for American Express Malaysia on Mindfulness. She is hoping to use her platform to give more motivational talks on women entrepreneurship, and advocate mental health more. Her most recent Interview for Madame Figaro, France, was on Skin Whitening and how this has impacted her community and their mental health.

In 2020, Vithya joined the charity organisation Covidcare Malaysia, to raise awareness and the share kindness stories throughout the COVID-10 Pandemic. Later that year Vithya colloborated with Creme De La Creme and created an Ice Cream flavour called Viramisu (Vithya’s Tiramisu). The proceeds of the Ice Creams went towards the Malaysian NGO DHRRA; towards online education for children from underprivileged families whilst schools were shut down in Malaysia due to the pandemic.

Vithya is based in London, UK, but travels and caters to clients all over the world.